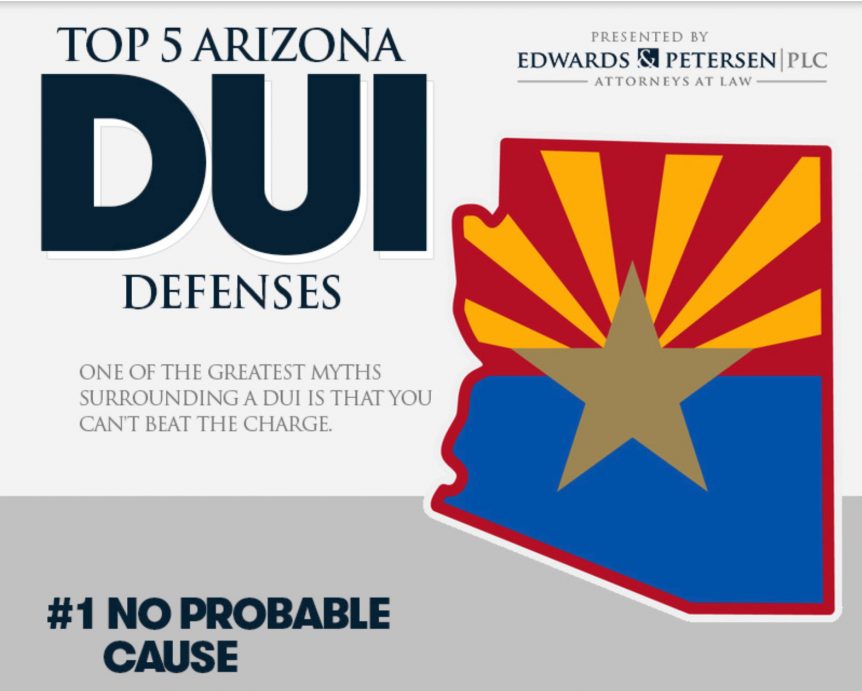 One of the greatest myths surrounding a DUI is that you can’t beat the charge, especially if you failed the field sobriety test (FST) or a breathalyzer. In reality, an experienced DUI attorney has a variety of defenses available to help fight your DUI charge.

At Edwards & Petersen, we focus on answering the five following questions:

Was There Probable Cause for Your Arrest?

That means that, if you’re pulled over while driving, the simple fact that you smell of alcohol is not enough to warrant an arrest. There must be another mitigating factor, such as fumbling with your driver’s license, weaving through traffic, slurred speech, or other common indicators of intoxication or drug use.

Even if you submit to the FST, the test results are invalid under certain conditions, such as if you’re over age 65, are wearing shoes with a 2″ heel, or have a disability that affects your balance.

Was There Reasonable Suspicion for the Stop?

Reasonable suspicion for the stop requires more than your presence on the road after last call, or driving through a particular neighborhood, or any number of reasons given for a traffic stop where the intent is typically DUI enforcement.

The police are not allowed to stop drivers solely because the driver fits a particular profile; such stops are illegal and, if properly argued by a DUI attorney, the case will be thrown out of court.

Were There Inaccuracies in the Blood or Breath Testing Device?


The guidelines surrounding breath testing devices include monthly and quarterly maintenance and quality checks. If the device used in your breathalyzer test failed to meet these guidelines, the results may be inadmissible.

Blood tests as conducted by Arizona’s government are also highly unreliable and inaccurate. The method of drawing the blood presents issues, such as whether the officer taking the test contaminated the needle with alcohol or used an expired container. Also, the sample testing method used by the police is not used by any medical professional due to its inaccuracies.

Both of these testing methods also have a 10 percent inaccuracy rating. At Edwards & Petersen, we never consider a failed blood or breathalyzer test as proof that a case is lost.

Were You Denied Your Right to Counsel?

In America, no matter what charges you face, you have the right to consult with an attorney before answering any questions. If at any time during your experience you asked to speak to a lawyer, law enforcement must provide you private access to a phone and a phone book within a reasonable time from your request.

If the officer ignores your request or waits too long to grant it, this may provide adequate grounds for dismissal of your charges. When it comes to DUI, speaking with a lawyer sooner rather than later is very important, as your case depends on biological evidence.

Your attorney will ask a variety of questions, such as when you last had a drink and how much you drank, and advise you on your testing options.

Were You In Actual Physical Control of Your Vehicle?

The question of actual physical control (APC) has undergone changes. It used to be that, if you were in the vehicle with the keys in the ignition, even if you weren’t driving, you were considered APC. A number of precedent-setting cases successfully argued against this idea.

If you decide to sit in your parked car to rest or “sleep it off” while the motor’s running, you aren’t necessarily APC. Your attorney will look at items such as whether the vehicle was in drive or park, whether the parking brake was set, and similar items that may indicate you were resting without the intention of driving.

If you’ve been charged with DUI, don’t wait to meet with an attorney. Time is of the essence in these cases, and we offer free consultations to discuss your case and explain your options.