Most people have heard the statistic that half of all marriages end in divorce. Many question the validity of that number, but according to the Centers for Disease Control and Prevention, the 50 percent guess is not far off the mark, at least for the nation as a whole. As part of its National Vital Statistics System, the CDC tracks both marriage and divorce rates both nationally and by state. In 2014, over 46 percent of marriages ended in divorce nationwide.Rates per state, of course, vary from the national average. How does Arizona compare to the rest of the country? Not well.

All marriage and divorce statistics as reported by the CDC are per 1,000 citizens. In 2014, Arizona had the highest divorce rate in the country. The graph below shows the divorce rate nationally, in Arizona, and then in the next three highest states and the three states with the lowest average (discounting Nevada, whose numbers are skewed by the fact that so many non-Nevadans get married there). Additionally, California, Georgia, Hawaii, Indiana, and Minnesota do not factor, as the CDC does not have divorce statistics for these states. 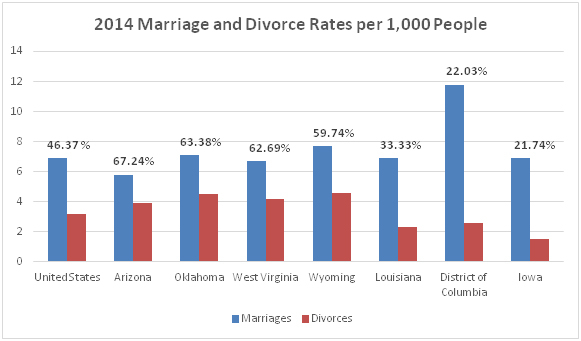 Where You Live: Diverse Divorce Rates

Previously, many people claimed that states with higher rates of marriage per 1,000 people would naturally have higher rates of divorce. The CDC numbers, though, refute this. For whatever reason, Arizonans divorce at a higher rate than the rest of the country, despite having one of the lowest marriage rates (number 44 out of 50 states plus the District of Columbia).

If you are part of the two in three married Arizonans seeking divorce, let Edwards & Petersen guide you through this difficult time. You need an experienced Family Law Attorney who understands Arizona law on your side and who will guide in how to achieve the desired outcome.